The Eddington number in cycling

Sir Arthur Eddington (Wikipedia article) was an astronomer and physicist famous for popularizing and explaining Einstein’s theory of general relativity to the English-speaking world. But more importantly than that he was a early forerunner of stat-obsessed Strava nerds like myself. He was a cycling enthusiast who liked to log where he’d been and how far – in fact his cycling logs are still stored in the Wren Library at Trinity College in Cambridge (this PhD thesis has a picture). I can’t find a definitive original source, but he has accredited-by-the-internet with inventing the (cycling) Eddington number. This number, E, is the largest number such that you have cycled E miles on E separate days. Eddington’s own Eddington number is variously credited as being 87 or 84. Veloviewer naturally will figure out your own Eddington number for you and display it in an attractive way. Here’s mine: 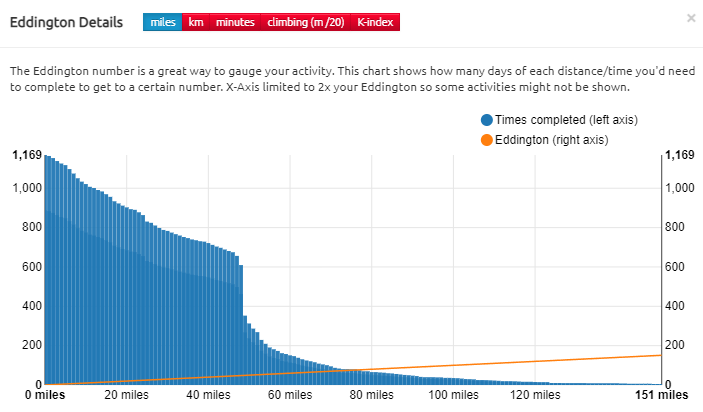 So right now my Eddington number is 76. The "cliff edge" at 48 miles is because I cycle 48 miles a day a lot (my commute used to be 24 miles in each direction), but I don’t cycle 49 miles on those days.

There’s nothing inherent about using "miles" in defining an Eddington number. You can easily switch to counting the number of times you’ve done E kilometres on E days (an easier job!) and VeloViewer will show you this to. I'm pleased to have an Eddington number of 108, so I'm a "metric centurion" but I love to be one for miles too. The number 76 makes is sounds like I'm not too far away. Alas whilst I have done 76 76 mile rides, I’ve only done 35 100 mile rides... I'm not even halfway!

Veloviewer also makes Eddington-style statistics available for minutes in an activity, climbing and kudos. It's another must for "stat collecting" cyclist.

Anyone have any idea who the world record Eddington number owner might be?

I think it might probably be one of the amazing challengers for the HAMR Annual Mileage Record – Kurt Searvogel rode 76,076 miles in a year in 2015. That’s 206 miles per day. So his 2015 Eddington number alone must surely be in excess of 200. Or perhaps Steven Abraham holds the record. But surely Amanda Coker swept them away by doing 236 miles EVERY DAY for a year?!!