On December 31st, 2018 Jonathan France accomplished an amazing 100x100 square, achieved completely in the year 2018. Probably an achievement never to be exceeded.

A. Jonathan France, age 60. My 1st cycle tour was from Stonehouse to Cirencester in 1975 on A roads - They were a bit quieter back then. I started cycle-commuting in London in 1987, which was a solitary experience. The nearest I came to competing was “racing” home from work to watch C4’s Tour coverage in the 1980s, and was on the Champs-Élysées to watch Perico win in 1988, maybe I was a year too early. Lots of injuries kept me off the bike for about 10 years ('97-'07). I suspect that the cumulative effect of too much sitting (office chair, car seat, sofa) has a detrimental effect on all our physiques, so I determined to get rid of all 3, something I achieved in 2014 and have been largely injury free since.

Q. When did you start Tiling ?

A. I remember looking at VeloViewer in 2015, without being inspired. I think exploring was there but had not been publicised, and I didn’t spot it. December 15th, 2016, I read Ben Lowe’s VeloViewer exploring article and signed up on the spot. I had been aggregating my rides using Jonathan O’Keeffe Multi Ride Mapper to ensure each ride explored new roads, but VeloViewer greatly broadened my horizons.

Q. Currently you have the 2nd biggest square and the 5th biggest cluster. How did this evolve? Where you a fanatic from the start? And what is the story of your 100x100 square?

A. Exploring new roads on Strava since 2013, meant my square was on the leaderboard (top 20 only back then) so I was “in the race” straight away. Most of my immediate relatives live a day’s ride west of my London home, so with my regular rides there, I quickly developed 2 clusters and linked them up. Mid 2017 there was a necessary adjustment to the VeloViewer exploring algorithm which generated lots of holes in everyone’s square. I set about filling these on day rides. By late 2017 my year’s max square was 60 and I had ridden a lot of those tiles twice. This planted the seed of an idea that maybe a much bigger yearly square was possible. (Luckily, my poor mental arithmetic kept me blissfully ignorant of the reality) My motivation for day rides was waning with the light, so I found another way to put holes in my square, filtering by minimum distance. By year end I had a year’s square of 60 for rides over 60km and an all time square of 60 for 60 mile rides (100km). 2018 I started in a similar vein, filling holes in my all time 60 max square, filtered by 100 mile rides. I didn’t expand my all time square beyond 60 until June, whilst Dominic went from 75 to 85. The summer arrived mid May and I set off cycle touring the South Downs. My target was to aim for 100 mile days, and determined to keep going (with breaks) while the weather held, luckily we had the longest driest summer for 40 years. I wouldn’t like to try this in a wet year, let alone a pandemic. My overall max square reached 96 in early October 2018, with no obvious way of expanding it. At this point my 2018 max square was no more than 40x40, but only 1,500 tiles short of 100 square, so whilst pondering the overall, I set about filling the 2018 gaps, which took till early November 2018. I think it’s significant that a 2018 max square didn’t become a target until October, when it had reduced to an achievable target.

On the morning of December 31st, 2018, I woke up with no plans, despite only needing 2 tiles to complete a 100 tile square in a year. I resolved to set out, more in hope that expectation, really just to prove I had not missed anything, and just in case the tiles had become accessible. I’d been struggling with these estuarine tiles for 18 months, and had resigned myself to needing to learn to sea kayak as the only viable way into them. But in planning the ride, I’d spotted a footpath sign on street view, which may provide access to the sea wall. If so, it may be possible to approach the tiles at low tide, without trespassing. The longest of long shots. On the ground it all worked well. I eventually found a way over the sea wall, followed the tide line and reached an abandoned jetty with a mesh fence - this looked like the end of the road. Sitting there contemplating the end of a dream, I spotted a gap in the fence, probably created during some urbex. I hadn’t come this far to turn around now, and luckily this turned out to be the last hurdle, though not being able to trust your footing, progress was slow and laborious. 2 hours each way, beyond the sea wall and I never saw another soul. Elated at grabbing the last 2 tiles, I now had more riding to do. I had managed to build my year’s square using only rides of a minimum of 100 miles. So I now had 8 hours to ride another 60 miles, get home and upload the ride. One hour before 2019, by 11pm, my 100 mile ride was done. Max square was now 100 x 100 in 2018 and 101 x 101 overall. The 2018 max square was built with just 123 rides of 100+ mile. A memorable day and end to the year. [Follow Jonathan on Strava here to see the full ride]

Q. I guess it doesn’t get much more epic than that. Any special tile memories ?

There was this tile very early on, when I still didn’t know a permissive bridleway from a restricted byway, I couldn’t find my way into a tile on the Wormsley Estate. Luckily, Pete Bartlett grabbed it a month before, and as he shared his rides on VeloViewer I could see the route. Thanks Pete. After that one, 99.98% of the tiles in my square were easy, given the time to ride. The 2 mentioned before made up for that. I was feeling pleased with myself being one of very few to have found a way into these tiles. In attempting to explain to the family what on earth I had been up to, I discovered that I wasn’t even the 1st brother amongst my siblings to achieve this, though I assured him driving his Mercedes through the front gates didn’t count.

Q. After this unprecedented 100x100-in-one-year-square, what are your next tiling goals?

A. After 2018, as my square was land-locked, I worked on expanding my cluster, which quickly reached the coast. These are the tiles I enjoy exploring the most. I find the UK coastline endlessly fascinating, and luckily there is lots of it. I may also try and build out my cluster to encompass a 100 mile radius from home but that is a lot of tiles. Hopefully just as Yorick and Jurgen have emerged to challenge the early adopters, others will soon follow in their pedal strokes, so I suspect my positions on these leaderboards are heading in only one direction. Though I am fairly confident my “slowest rider on VeloViewer” title is safe for a while “Eddington (Minutes)”.

A. Not yet, though as I’ve said, I think I’ve found where the really interesting ones are. On a long ride, tiles are the perfect accompaniment, providing an interesting diversion, though my boredom threshold was properly tested on 31/12/2018. I’ve been back since to check the tiles are still accessible (and that it really happened) and this time I gave up before the jetty, so I guess I cancelled that one. The area is now so overgrown I am confident the fence has not been repaired.

Q. what are you looking for in a good ride? to which rides do you look forward in particular?

A. Increasing my max square was great motivation, but I prefer to always ride, so after 60x60 I waited for summer to cycle further away and camp around the furthest tiles. Another motivation was HS2 rail link that in 2018 was awaiting the final go ahead. This had the potential to make one or more tiles off-limits for a few years.

Q. To reach a 100x100 square you must really focus on your square. Do you feel clustering is very different from square-tiling?

A. Clustering is easier than square'ing as gaps are not always a hindrance to progress. It can also be "around" or "to" as in the Baltic endeavor of Jürgen. Progressing North I am aware a cluster "to" needs to be 3 tiles across so I plot the route to be at ideally 2 tiles wide at least, just to be sure. What helps me is the EveryTile Garmin app together with Edge firmware 8.10, these make it easier to spot near misses and detour to visit them. I suspect I am more likely to be clustering to new destinations this summer than around my existing ‘neighbourhood’.

A. I'm not aware of anyone starting tiling because of me. I may have deterred a few though ;-). I occasionally check the UK leaderboard for new arrivals.

A. Anyone bitten by the tiling bug is at heart an intrepid explorer, and so does interesting rides. Jan K is worthy of special mention, as he endeavours to build a huge square Exploring From Home. When Jurgen eclipsed my mark with a 102 square, that “ride” looked like a TCR parcour, a magnificent achievement. Dominic was the early leader, and reached 100 over a year ago, but appears blocked either geographically or motivationally. It is interesting that at least three distinct accessible 100 tile squares exist across Europe. (Edit. Willem Oving is with 99x99 on the brink of a 4th one. The logical extension to my love of coastal tiles is linking them all up. Luckily I don’t have to as photographer Quintin Lake walked them all between 2015 and 2020. As extraordinary feats go, that is hard to beat.

The two needed changes were the accuracy refinement and introduction of clustering. It’s a work of art. There is plenty of untapped potential already in VeloViewer, for example filtering by min distance. I am now filtering by Gear, giving each bicycle its own square, which will always be interesting whilst there are still unridden roads to ride.

Willem Oving is the dark horse, coming up on the rails. He looks like he may be 2nd behind Jürgen soon.

Editor's note Fascinated by Jonathan's story of the very difficult tiles with which he completed his 100x100 square, I attempted to visit the "Coryton tiles" in August 2021. I too stepped over the seawall at the end of the public footpath and reached the abandoned and collapsing jetty. I found that the fence was repaired and now equipped with a security sign warning people to keep out. It may be the case, then, that even the ground between the seawall and the estuary is private property. If so, Jonathan's trip may be difficult to replicate, meaning that 100x100 squares will be tricky in the UK for the time being. All is not lost however: the Coryton site is still due to be redeveloped as the "Thames Enterprise Park". It is unclear at this time how accessible the redeveloped site might be, but tilers will live in hope! 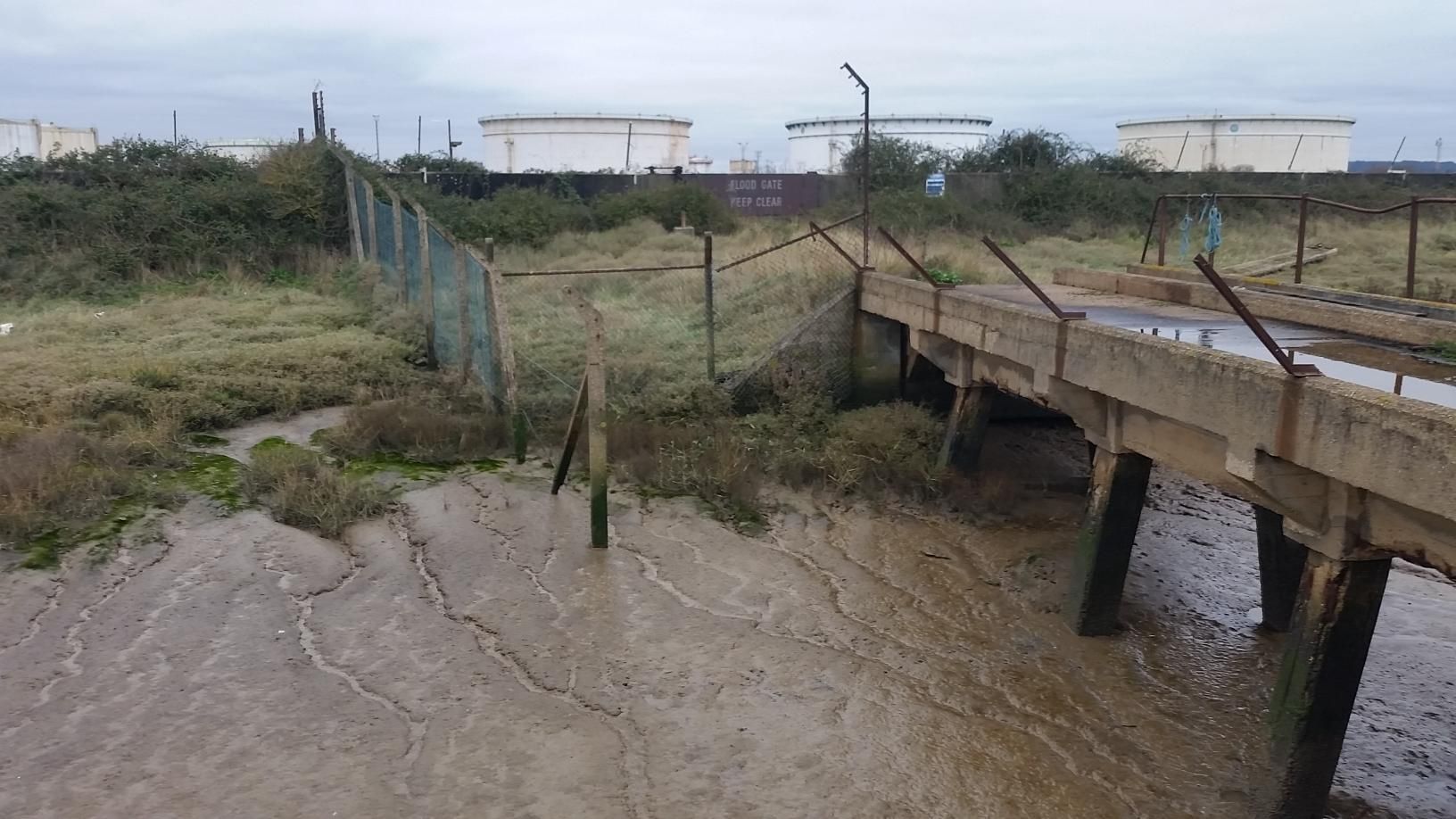 Finding a way to the hardest tile on the 100x100: an incomplete fence outside the sea wall around the former oil refinery at Coryton in the Thames Estuary 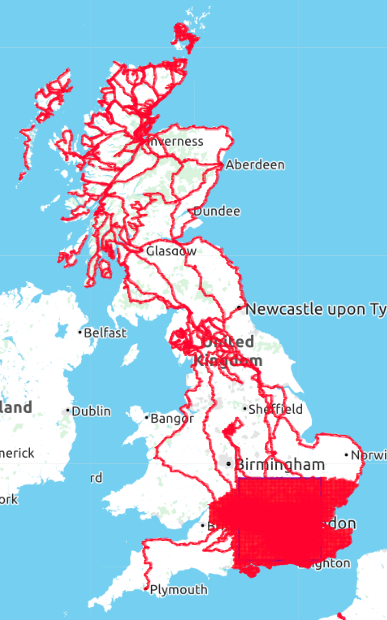