Yorick Dix's tiler interviews: Koos Woestenburg - One cluster to rule them all

Q. Hi Koos. Could you please introduce yourself?

Hi, I’m Koos. Born in De Rijp, a small historic village in the Northwest of the Netherlands. Started cycling to school when I was 6 or so, and never stopped since then. At about the same age I astonished my parents by showing on a map how Santa Claus travelled to Holland. So my love for cycling and making tracks is about 55 years old. I started tiling quite late, in 2017, tipped by a collegue of mine who invited me to collect a tile in a cornfield in the neighborhood. I was hooked immediately. All my life I tried to discover new routes and “collected” my rides. First on maps, and since 2009 as GPS-files. U sing my many rides to all corners of Holland and into Belgium and further, within a year or so my cluster reached into Belgium and some Dutch regions where I like to cycle. Soon the idea of filling up all of the Netherlands started...

Q. So you had a head-start when you started tiling?

When I first loaded my rides into VeloViewer in 2017 I had 2000 clustertiles from the start. Back then that meant almost top-20 already. Besides that there were lots of easy ways to increase rapidly. At the end of 2017 I had 5,000 clustertiles and was placed in the top-10.

And more importantly, I really liked what I was doing. I planned to fill The Netherlands in 3 years time with about 20 long rides a year. And that proved to be about correct. I think Gerard Burgstede is now only the second to achieve this. Early 2019 I was first on the cluster leaderboard with about 14,000 tiles.

Q. Speaking of the leaderboard. It's a family business for you!

When I started tiling in 2017 Nils Oudejans and his friend Dominique were the top clustertilers with about 7.000 clustertiles and squares of 80x80. And I think their cyclying club dominated both cluster and square leaderboards (which were only 20 places long back in the day) with 5 or more members in the top-20. Actually it was Nils who followed me on Strava and predicted one day: "you'll pass us within a year". That was the moment I realised that I could become the number one within a year or so. Totally unimportant of course, but much fun to have such a challenge. The surname of Nils, Oudejans, is a very familiar name in my village, so I asked him about it. He said his family originated from my village and he even had an aunt with my surname Woestenburg. So with the help of my mother we figured out that this aunt of Nils was a full cousin of my father. Not really family, but close enough for inhabitants of two different countries!

Q. I think you never bothered too much about your square, you were never interested?

Around my home the max square is about 19x19, because of the North Sea and some big lakes. And besides that the Netherlands has a lot of water and some nasty military terrains which limit my max square to 60 or so. I am not a kayak-man and I hate to visit forbidden places. There is a very irritating impossible tile on a military terrain at the southeast border of Holland that limits bigger squares also, the RAF Brüggen site. I understand you can visit a golf club there, but not in cycling clothes or jeans. Bleah! Of course I crawled a few hundred meters under barbed wire once in a while on private of protected areas, but not too much please. I stick to cycling.

Q. What were your goals in cycing and how did those evolve?

Since I was a kid I had biking dreams. Some of them became plans, and a few of them came through. Like my plan crossing the United States from coast to coast in 1989 and some trips to the very corners of Europe (Gibraltar, Southern Italy, Athens, Istanbul, Estonia and the Black Sean in Bulgaria).

A dream is to connect my Italian tiles, but that will be very difficult. A concrete plan is to fill up the Dutch speaking part of Belgium, that’s about ten rides the next year or so. When I stay healthy long enough I might fill up more of the Ardennes and the Eifel, which is very challenging because of the hills.

Q. You are very far in front on the cluster leaderboard: 4000 tiles more than #2 placed Jürgen, 5000 more than myself on 3rd place. But we are really trying and Sem is approaching fast. How much closer will you let us come? Will you start doing extraordinary things again to prevent that?

My nearest new cluster tiles at the moment are a 200 km drive by car or train away from my home, so it’s not easy to enlarge my cluster. No more daytrips for me; only holidays and weekends. I also have to consider my work and family…. At the moment I have my small moment of fame on top of the leaderboard, but as a fellow tiler once said: “no matter how extreme your achievement is, there will always be someone to improve it”. So be it. I stick to the fun of tiling and have a lot of fun following my colleagues and seeing where they are cycling.

Q. Did tiling change the way you cycle on normal rides?

Tiling forces you to visit places you don’t think of yourself, that’s the fun of it. Although I always tried to find new routes in new regions, somehow you tend to stick to the same types of roads and routes. And that really changed because of tiling. Three years ago I started gravel biking, to be able to fill up the untiled regions in the east and south of Holland. Gravelling opened a complete new and exciting field of biking for me: it has the speed of racing and you cover distances like on a racing bike, but you also enjoy more of the countryside on track roads.

Q. It's nice to reach a new country with your cluster, for us in the Netherlands Belgium, Luxembourg, France and Germany are feasible, although it takes a lot of rides. But your cluster reaches much further, can you tell us about that?

Before the tiling era I cycled to friends in Switzerland and to Italy a few times. So I had a small cluster at the Bodensee and a few tracks to Basel that could help me. After expanding my cluster south into Luxemburg I saw a message from Chris White who lives near Geneva and had 7 countries in his cluster. He asked himself if it was possible to connect Luxemburg, Belgium and Holland. Thus started my dream to make the connection to my Bodensee cluster and to nearby Austria and Liechtenstein to gain 8 countries….

Q. Do you have a special tile of which you have special memories? Any tile which took extraordinary efforts to reach?

I somehow always seem to miss one or two tiles in my rides. Like one in Friesland, in the north of Holland. With my wife I spent a weekend in Friesland once. That was the opportunity to enter this missed tile nearby a military airport. I went there from home on my mountain bike: about 150km of cycling for one tile! Besides that it was winter and freezing a few degrees, the wind turned to headwind and it was extremely slippery on the cycling paths. The last 30 km it started snowing first and raining later. It took me some days to recover from that trip and warm up again.

Q. Did you manage to do tiles that others might consider as dangerous or impossible?

I follow a lot of you tilers and all of you are more adventurous than I am. Sorry, but I am scared as hell for farm dogs and once had a narrow escape from a very furious German shepherd. I had to climb over a fence with my bike to escape. That's dangerous enough for me.

Q. What particular type of tile ride do you like most?

I prefer 200+ km rides whenever possible, on asphalt or gravel when the terrain is not too rough. I love being on saddle a whole day and when the going gets tough more than 12 hours or so. Beyond that it's not much the tiles themselves, but the landscape and circumstances I like. Cycling through unknown fields, preferably very early in the morning, seeing a deer, fox, weasel of squirrel crossing my path makes me smile all day.

This summer, in the western part of Vlaanderen, Belgium, I rode for 8 days in a row with luggage, rain, hills, a lot of headwind and unpaved tracks. I had to change my schedule to max 170 km or so. The problem with 210+ rides is that you're in quite a hurry. That's one of the reasons I sometimes miss one or two tiles, no time to stop and check properly at detours and unexpected fences... Because of these detours etcetera nowadays I always plan my rides some 10 kilometers shorter. I will get to 210 anyway and that is also good for my Eddington 😊.

Q. Tiling brings us to the most beautiful and weird places. What did you discover because of tiling, what you otherwise never have known?

I discovered off-road cycling. Apart from the clustering, this year on holidays in Italy I started a small new cluster in the Appaninian mountains. Never expected it to be so hard and so much fun! Between socializing and celebrating holidays with my wife in three weeks I created a cluster from the Adriatic Sea into Umbria and San Marino. Amazing fun!

Q. Are you ever fed up with tiling? Have you ever cancelled rides when already started?

Never when already started. But sometimes it happened that when I planned to ride far away, had everything organized, loaded my bike in the car.. and then when the alarm clock rang at 4 o’clock I turned in again.

Oh, I love to follow a lot of you. Unfortunately it is impossible to follow more than about 100 friends. When I see the “midsummer murders” pictures of the rides of Jonathan France, or the extreme snowtiling of Pekka Tahkola it makes me dream of riding those tracks one day myself.

Well, I hope to inspire other people to do so, but I understand that for good reasons not everyone has the tiling spirit. You have to be a little mad I suppose… 😊 A good cycling friend of mine has become quite enthusiastic in tiling after me. We only once rode a tiling ride together. Tiling is a very lonesome hobby...

I really have no idea. I like it as it is. For me it combines the discovering of new paths with my love for maps and making routes. Of course there is an endless list of possible challenges to add, but I doubt if that makes tiling more interesting for a lot of people. Really, the challenges or leaderboards are not that interesting except maybe for the few people mentioned in it. It's the fun of cycling that is the most important.

I like to hear Pekka's story. He sometimes does quite impossible rides in Finland. One of the few countries of Europe I have never cycled in... 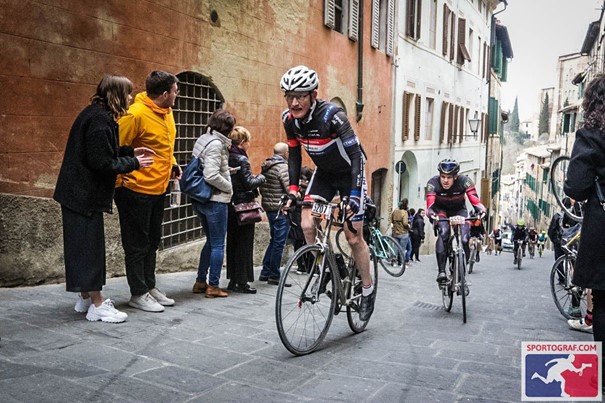 Koos at the finish of the Strada Bianche in Sienna 2019 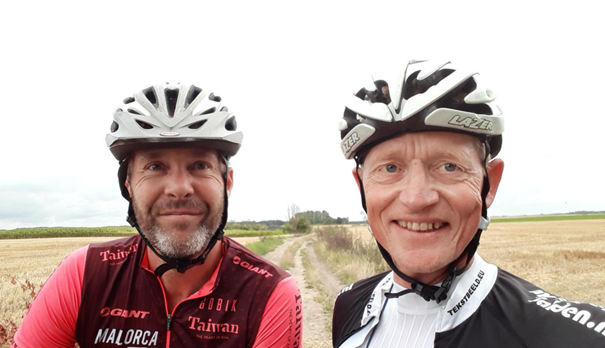 Koos and Nils Oudejans (left), tiling in a field. 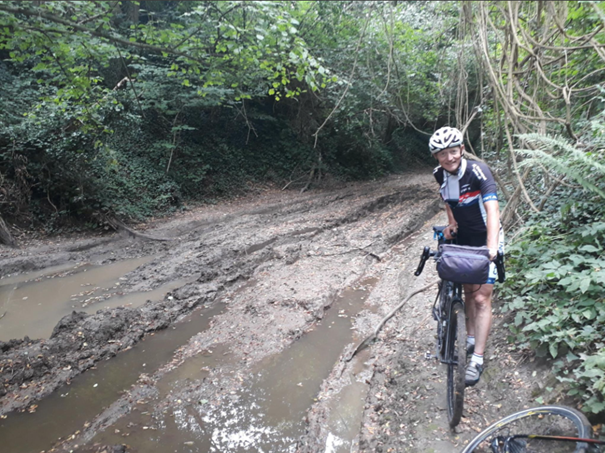 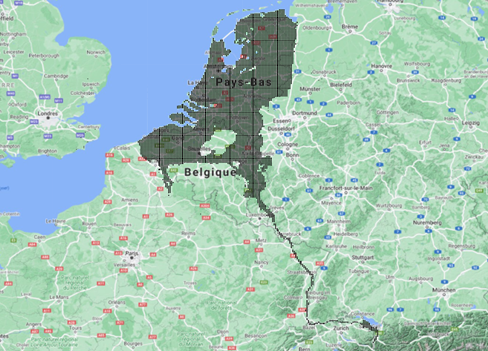