Where can I legally cycle?

If you are trying to collect cycling tiles it useful to know what you legal rights when it comes to cycling in various places. The easiest tiles have a nice wide road through them - but not all tiles are easy! On this page we list the legal restrictions on where you can and can't cycle in various countries around the world. We hope to expand the coverage to more countries over time. If you have good information about the rules in your country, please do get in touch.

What are the main types of highway I can cycle on in England and Wales?

You can cycle on roads, "byways open to all traffic" (BOATs), restricted byways, cycle tracks and bridleways. The right to ride on bridleways was enshrined into law in the Countryside Act of 1968. The same Act makes clear that the authority who maintains the bridleway is under no obligation to make it actually usable on bikes though! It can be a completely muddy bramble-y mess that only the most hardened mountain biker could get through; and it would be legal. Additionally, on bridleways cyclists are legally obliged to give way to pedestrians and those on horseback.

Can I cycle on footways?

Firstly it is important to note the difference between a footpath and a footway. A footway is path that is alongside a road, e.g. in a town, and we would typically call them a pavement. A footpath on the other hand is a route without a road alongside

It is illegal to cycle on footways. The roots of the law date back to the Highways Act of 1835 and the definition of a bicycle as a "carriage" in 1888. In 1999 the government gave police the power to issue on-the-spot Fixed Penalty Notice fines to pavement cyclists. Theoretically the fine could be up to £500, though £50 seems to be the standard. Also, the number of fines seems to have dropped dramatically. Around 10,000 were issued in 2010, but only around 500 in 2019. When the FPNs were introduced in 1999, the then cycling minister Paul Boateng confirmed the firms were only intended for cases when the cyclist was riding inconsiderately, NOT for cases when the cyclist felt the road was too dangerous. This advice was re-iterated in 2014 by the minister of that time, Robert Goodwill. This latter issuing of advice seems to have caused the police to reduce the number of fines issued.

Can I cycle on footpaths?

As noted above, a footpath is a route without a road alongside it. Unlike footways above, it is not a criminal offence to cycle on a footpath. It is however a trespass against the landowner.

If a landowner or their agent finds you cycling on a public footpath on their land they can ask you to leave. If you were to decline, they could use "reasonable force" to eject you. The landowner could also make a civil claim for damages. As simply cycling is unlikely to cause actual physical damage such damages would probably be nominal only.

Can I walk my bike along a footpath?

The law in this area is actually quite complex and appears not to be fully settled as a matter of law.

Sydenham's Public Rights of Way: The Essential Law states simply that walking with one's bike is not a permitted use of a footpath and so would be a trespass. She refers to a case from 1861 where a pram was held to be "usual accompaniment" of a pedestrian and so was allowed. Bikes, she says, are not a "natural accompaniment" and so not allowed. This is also the view of the Rambler's Association

Cycling UK takes a different view - essentially believing that had bikes been invented in 1861 then they would have been categorised in the same way as the pram - in particular not "injurious to the soil". It also points to court cases where a cyclist walking across a zebra crossing has been considered to be a pedestrian and the existence of road signs that say "No Access Except For Cycles Being Pushed" to suggest that bike-walkers are pedestrians and thus permitted on footpaths.

Can I cycle on a motorway?

No you can't legally cycle on a motorway. Some might argue that cycling on a motorway hard shoulder would be safer than it would be to cycle on some other roads, but that's irrelevant. It is not allowed and the media loves a good "cyclist fined for riding on motorway" story - e.g. M1, M4, M25, M55 and M60.

Are there any other roads I can't cycle on?

Yes. Under the Local Government Act of 1972, it is allowed for local authorities to forbid cycling by use of a local order, byelaw or Traffic Regulation Order (TRO). Examples include the A505 Baldock Bypass, the A55 at Conway and the Dartford Tunnel and Bridge. Underpasses and bridges are particularly likely to be affected. There will be signs indicating that cyclists are banned from using such roads.

How can I find where the bridleways are?

Every local authority must publish a "Definitive Map" which shows where its public rights of way are. They can usually be found online (e.g. here is the one for Oxfordshire and here is Northumberland. However the maps are usually fairly poor - their purpose is to be definitive rather than useful! It is much better to use the wonderful site rowmaps.com that offers an integrated view for all counties at once. 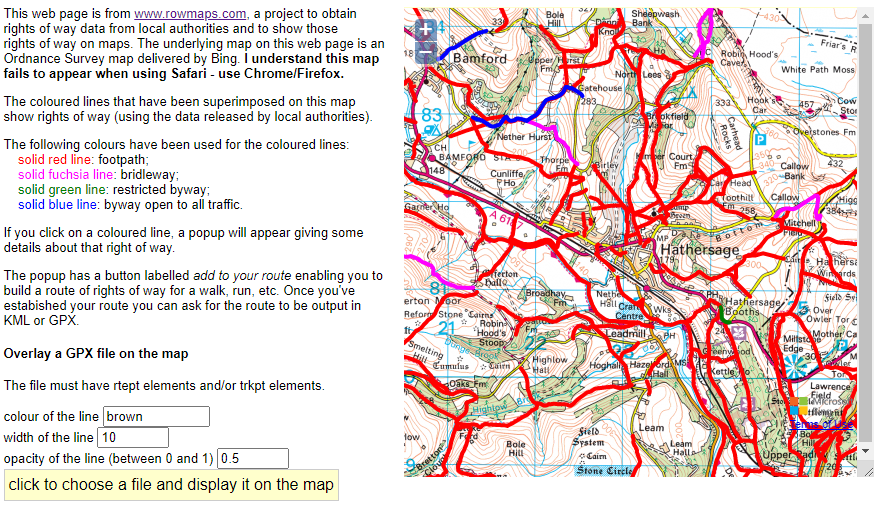 A screenshot from rowmaps.com showing the public rights of way near Hathersage, Derbyshire. Footpaths are in red, bridleways in fuchsia and "BOATs" in blue.

Can I cycle on towpaths?

Generally yes. If a towpath is also a bridleway then you have a statuary right to ride on it. In other cases, towpaths are typically owned and maintained by the Canal and River Trust. This organisation succeeded British Waterways in 2012 and since that time permits have not been required to cycle on towpaths run by them on a "permissive use" basis.

Is trespass always a civil matter only?

No, following the Serious Organised Crime and Police Act (SOCPA) of 2005, Trespass on a Protected Site is a criminal act. Entering such a site without permission is a serious offence attracting fines and/or prison. Tilers are advised to be particularly careful to avoid trespass when trying to bag tiles near such sites. Categories of Protected Sites include:

Examples include Windsor Castle, GCHQ headquarters, Menwith Hill and Sellafield. This is not exhaustive. A full list is available from the UK government website. 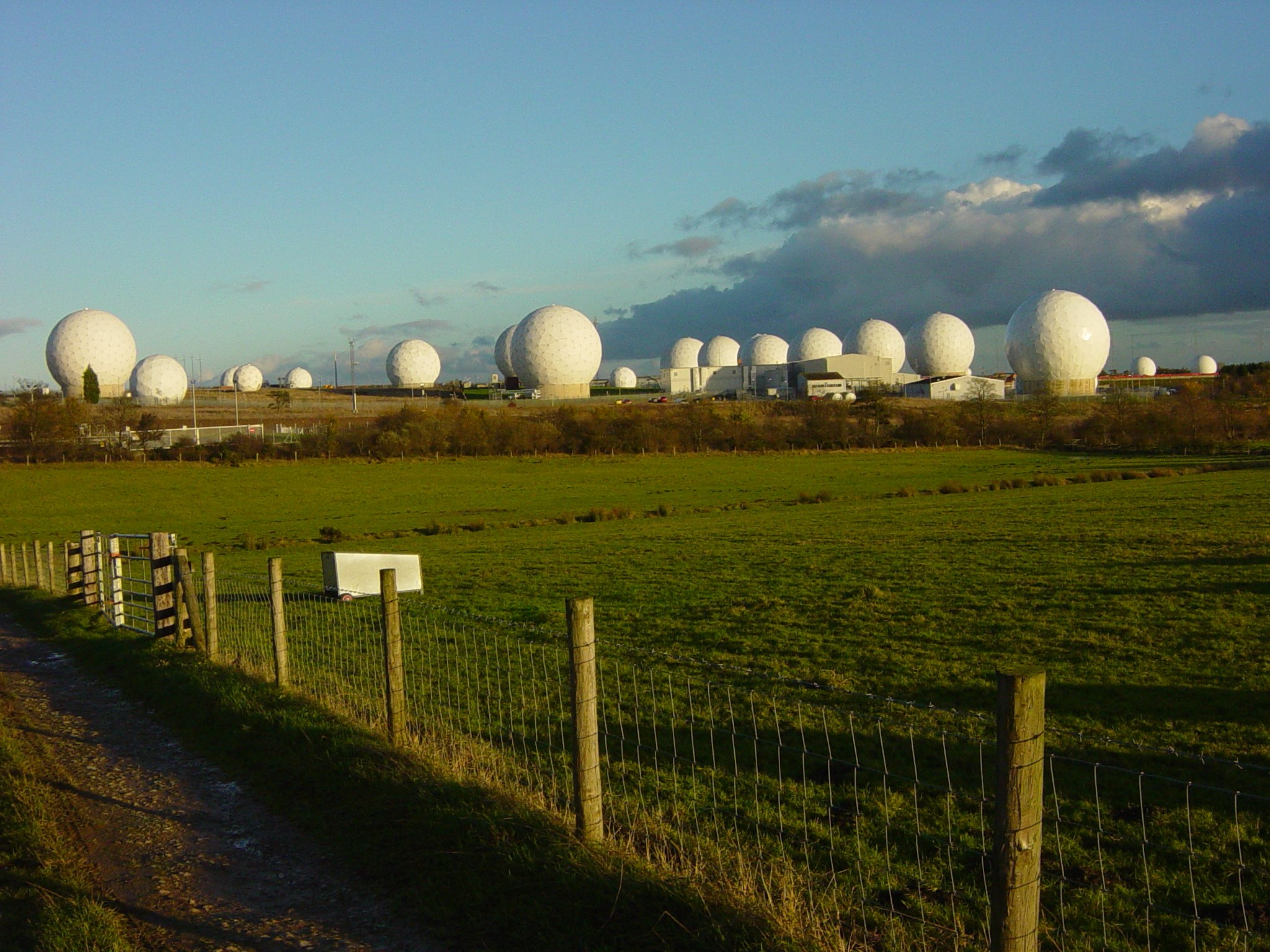 Menwith Hill is an example of a protected site; trespass is a criminal offence
Image in public domain, originally photographed by Matt Crypto, via Wikipedia.

The greater right to roam to be written here.