Hello Yevhen. Could you please introduce yourself?

My name is Yevhen. I'm 38, living all my life in Kharkov, Ukraine. I’m working as an IT engineer. Married and we have 3 kids - 11 and 9 years old, yes, a twin. I bought my first bike, a mountain bike, in 2015. Now I have an MTV, road, gravel and even fat bike in the garage. Long distance rides and audaxing are my main hobbies since autumn 2016. I took part in a brevet from a local club and completely fell in love with this kind of riding. I took part in more than a hundred BRMs over last 5 years, completed 1 Super Randonnée (Ötztal Rundfahrt), 4 LRMs (1000km + brevets) and finished the well-known Paris–Brest–Paris event in 2019.

My style of riding is mostly about exploring new roads and places. So I found the tiles feature in VeloViewer really useful for me. I started tiles hunting about couple of years ago and do it in parallel with brevets and as trainings.

Also I'm trying to drive Audax Kharkov club last several years - creating routes for brevets and I work on the ‘Brevet-bot’ in Telegram Messenger which simplifies registering for brevets and checks on control points.

I found the tiling feature in VeloViewer approximately in autumn 2019. At the same time I started taking tiles into account while planning my rides. My riding style was about exploring new roads from the very beginning of my cycling hobby, so tiling is exactly what I need to translate my exploring achievements in some kind of numbers and visualization.

Also I like wandrer.earth service which tries to calculate a rider's road coverage. The accuracy of their algorithms is not optimal and I’m not very happy with its output. But the numbers in the result look interesting.

You do a lot of audax tours and that probably gets you lots of new tiles?

I did brevets before I started tiling. At the beginning of my "brevet career" I really enjoyed some kind of competition with myself. I did a 300km BRM ride and then tried to check if I'm able to ride more and more. It was a great feeling of my own progress. And exploring new places was a key point of such long rides. Then my brevet philosophy changed a bit and my rides became a bit slower, but with taking more pictures and visiting more interesting places. Also there was a demand from some cyclists to ride more marathons on different routes, but the local audax club suggested only few of them and on the same routes each year. So a few guys created one more audax club here and I take part in its organization

Starting from the COVID crisis our club introduced a “flexible” option of riding Brevets. It allows riders to follow suggested routes in designated time periods or even create their own route and ride it as a brevet after organization approval. It allows me to take into account tiling during route planning and successfully combine audaxing with tile hunting. So my tiles coverage increased dramatically during 2020.

Do you focus on square or cluster in particular? Did the way you tile change over time?

I started to increase my max square in my area from September 2020. It was about 20x20 that time. While doing that I’ve trying to extend my max cluster if possible too. I have no real preference in going for square or cluster in particular. Just trying to cover new tiles if possible, that's what I like.

What are your tiling goals?

Cover 50x50 max square and expand my max cluster to all neighbouring region main towns (Poltava, Sumy, Dnipro, Lysichansk and Kramatorsk). I've set myself no time deadlines for the goals so far. Moreover, I'd like to avoid cases when tiling becomes a routine. Each ride has to be a good adventure and give me enough fun and inspiration for the next ones.

Well, it's full of surprises. The best tool for such tiling here is a gravel bike. In a lot of places you can’t rely on digital maps. Configuration of dirt roads may change significantly from year to year (or even month to month) and only a few of such changes are reflected well on the OSM maps. I did try to contribute with adding some fixes to these open source maps.

So on planning my exploring sessions I have to use Strava heat map plus satellite view to estimate if roads or paths are rideable. But in fact such an approach fails regularly and my riding becomes hiking. There are relatively large distances between villages or towns in North-East Ukraine so supply management might be an issue. You should keep in mind to fill your water bottles in time, especially in summer.

There are some areas in Kharkov and neighbouring regions where I rode for 2-3 hours and saw no people in the afternoon. Distances between villages with shops or water sources can be up to 30km, and that is without any tiling detours. In between are only endless fields, forests and abandoned places.

Also there are a lot of different surfaces on the roads here - starting from ideal new asphalt to deep sands and gravel from broken pieces of bricks. So roads usually have a lot of ways to surprise you during exploring. Regular elevation in my area is about 1km altitude per 100km of distance without a lot of steep ascents. So it’s relatively flat and easy to explore. In early spring and late autumn it’s almost impossible to do rides which are not 100% tarmac because of rain. Dirt roads become just too muddy. But a few frosty days can make dirty roads rideable again. I successfully used an old MTB bike with spiked tyres last winter.

How is the behaviour of car drivers generally in the Ukraine?

You know, drivers all over the world are polite and gentle in 99% of cases, but cyclists tend to remember only the other 1%. Subjectively, in Ukraine driver culture becomes better and better each year. I was surprised when a cyclist from Romania who participated in our 1200km LRM (the route was mostly on main roads) said that drivers here are much more polite then on this motherland. The main issue with safe cycling here is the very poor cycling infrastructure. Even large cities have no dedicated cycling lines with practical value. So in the majority of cases you have to ride the same road with the cars and in case of huge traffic that's for sure dangerous and annoying. So I'm very happy with my gravel bike that allows me to avoid main roads and enjoy riding on calm rural ones.

In your surroundings, has anyone started tiling because of you?

Yes. Valeriy started tiling after he followed me on Strava and saw my riding style. So we met because of tiling and became friends because of tiling. We did several really interesting common tiling sessions. There is no competition between us, only collaboration.

Is there an active Ukrainian tiling community that you know of? How do you share information with other tilers?

There are not a lot of tile hunters here, only Valeriy and myself, that I know of. We can discuss our tiling plans directly!

You are relatively near the border with Russia. Is it possible for you to cross the border on a ride?

Potentially yes, on special points only. But Russia is the last place on the Earth I’d like to visit right now. Our countries are actually in a war and relationships are really bad. So my max square is strictly limited from the North and East by the border with Russia.

You have did some cycling in Western-Europe, how different is cycling in Ukraine?

I have little experience riding in Western Europe and really liked the cycling infrastructure, amount of cyclists and car drivers behaviour. Actually I rode only the Super Randonnée challenge in the Alps from Munich and the Paris-Brest-Paris event in 2019. Both rides were great and left a lot of nice memories.

I have a lot of plans for cycling over Europe. Ukrainians can probably visit the EU for tourism purposes without a visa and it simplifies journeys a lot. I don't have plans to participate in any events in other countries so far. But I'd like just to travel (maybe in bike packing or credit card format) by bike on routes I created myself. Right now I postponed international trips due to the COVID epidemic. I had an unpleasant experience with COVID this spring, so even after vaccination I am trying to be careful with trip planning. I'm looking forward to someday visiting Scandinavia and reaching the North Cape and ride to other countries I've never been before.

Do you have a special tile of which you have special memories? Any tile which took extraordinary efforts to reach?

I had a really interesting tiling experience last winter. Valeriy and I did several rides on 2 of the largest frozen reservoirs in the Kharkov region trying to collect as many tiles as possible that are not achievable by bike in another season. On the first ride I saw -27C on my Garmin, so it was chilly enough. Valeriy filmed some of our adventures and you can find three films on Youtube (embedded on this page)

Did you manage to do tiles that others might consider as dangerous or impossible?

I collected several tiles near regions on Donbas where war conflict is still in progress. Some of them I did very recently with the help of my friend in Mariupol. We managed to ride close to the last block post before military positions near Shirokino on the Azov sea coast. Sad picture, to be honest. And the sounds of shooting added enough adrenaline.

Are you ever fed up with tiling? Have you ever cancelled rides when already started?

In the majority of rides I tried to collect planned tiles but in some cases I postponed particular ones when my initial plan was too hard to be implemented. For example, I was faced with tiles which were impossible to get from the points I planned but much more easily collected from another. But at the same time I was under time pressure on those rides and decided to collect 10 tiles versus spending too much time on the tricky ones.

I didn’t follow other tilers a lot. I only follow Yorick and Jürgen on Strava. Frankly speaking, the amount of tiles covered by riders is nothing but an indicator of his/her available free time for hobby plus his physical form.

Any ideas on the whole concept of tiling? Any possible improvements you are thinking of?

I know that some people here don't want or can't afford to buy a VeloViewer subscription to have access to tiling features. There is a free option on Stathunters but without a way to have a handy map editor with tiles and leaderboards. It might be a key reason for making tiling more popular.

Also I don’t remember (but maybe I just don’t know how) a simple way to see how many new tiles you got on the ride rather than to do some calculation with the total covered tiles number. I think it might be useful to have one more property in activity on VeloViewer with a number of new tiles. Also similar properties for increasing your maximum square and maximum segment would be a nice to have.

I’m interested in the story of my interviewer, Yorick Dix - you have covered a very large amount of tiles! 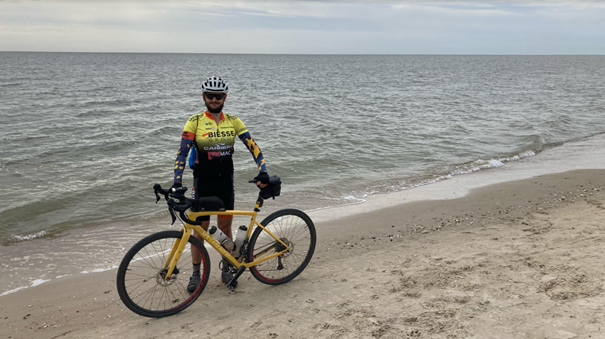 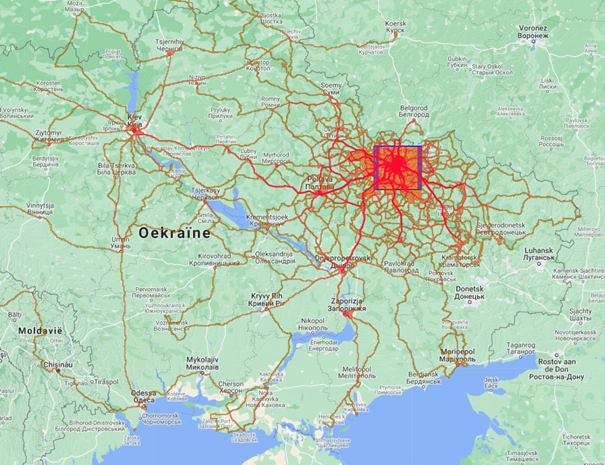 Cycling along the Oskol reservoir

Cycling on the Pecheneg reservoir in -27 degrees